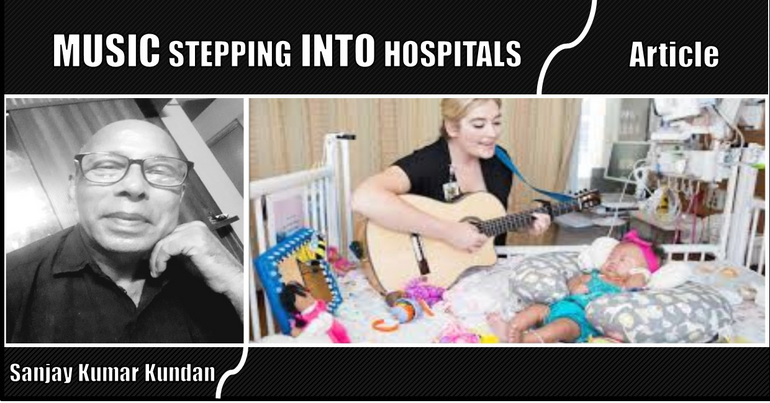 MUSIC STEPPING INTO HOSPITALS
by  - SANJAY KUMAR KUNDAN
--------------
How soothing it is to hear a tune of Beethoven or Mozart or the classical Indian ragas in the corridors of hospitals. Or direct into a patient’s room? Generally we associate hospitals with the smell of medicines, the sound of mayo scissors, forceps, clamps, etc not with the music of a tank drum, a ukulele, a sitar or a harmonium. But  why music in the hospitals? The plain answer is: MUSIC HEALS
Yes, not only the medicines but music also heals. So now the term music therapy is not that unfamiliar to the ears and we are now interacting with certified music therapists. And we have registered the impact of music in the cure of so many ailments. It is surprising. But true.
When we go for a surgery, anxiety grips us and a certain dose of sedatives is must. It is surprising that the patients of knee surgery, cardiac angiography and colonoscopies were administered music before the procedure and lo, they had lesser anxiety and they needed a reduced dose of sedatives than the normal doses given during such operations!
It sounds miraculous but it has evidence that music restores lost speech. Former U.S. Representative Gabby Giffords is an example whose speech ability was destroyed by a gunshot. She used a technique of singing her thoughts and then gradually dropping the melody and recovered her speech.
It again appears unbelievable but the controlled clinical trials have proved that music has become a tool in cancer therapy also. The cancer patients who undergo chemotherapy and radiotherapy have anxiety, nausea and vomiting. Listening to music has reduced these tendencies.
Two more examples of music therapy are very revealing about the power of music- it works for the patients suffering with dementia and mental illness as well. Listening to music has helped the dementia patients in recalling memories. Music has played a positive role in the issues of mental health also.
Now we know that to support medical treatment there are complimentary treatments. They are yoga, creative art, etc. Music is also one of them. But music therapy is easier of all. You don’t have to take much of pains and much of your pains is relieved. You just have to hear soothing music as prescribed by the music therapist; you don’t have to show creativity, you don’t have to stretch your body as you do in yoga and you get the results.
Now that the mysteries and power of music are being revealed, when it has made its official entry into medical science, we, the moderns should not pat our back for the novelty of the invention. Therapy by music is not a new concept. If you flip the pages of history back to Plato and give a cursory glance at The Republic, you cannot skip over these lines: “Music is most sovereign because rhythm and harmony find their way to the inmost soul and take strongest hold upon it, imparting grace, if one is rightly trained.” These lines say much but if we go far back in 4000 BC we find harp-playing priests and musicians for music healing. And if we rush forward to the Middle Ages healing by music was in more specific terms. For gout there was alternating sound of the flute and the harp. The therapy by music had taken a form but somewhere it was considered to be magical. The late 19th century cleared the mist of superstitions and Herman von Helmholtz, the German physicist and trained physician the pioneer of physiology of acoustics came forward with the idea of the emotional effects of harmonies on the human psyche. He opened the path for music as a tool of therapy. In 1914, Evan O'Neil Kane moved the phonograph into the operating room and tackled the “horrors of surgery” of the patients as the music reduced their anxiety. Decades rolled by and music became auditory analgesia. Now studies are going on and scientists are investigating the benefits of music on patients in intensive care unit.
The Holy Bible says in the beginning there was ‘word’, the Quran refers the voice of ‘kun’ and the Hindu mythology the sound of ‘om’- these are musical words which claim the creation of universe. The world knows the power of music from ancient times and now in the 21st century we bow down to its healing power. Let’s search the chords within our hearts and heal the world with music of love.
*** 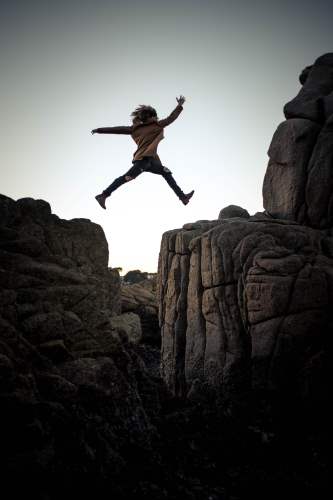 Get to Know Ayurveda 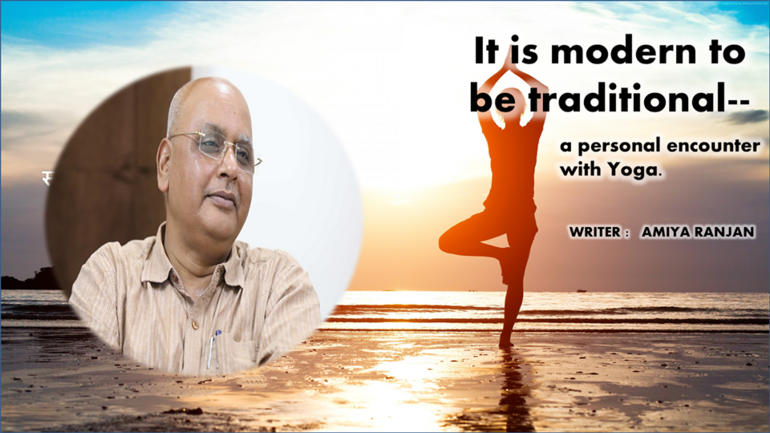 It is modern to be traditional : a personal encounter with Yoga.