The World in the 21st Century: A Melting Pot of Many Cultures 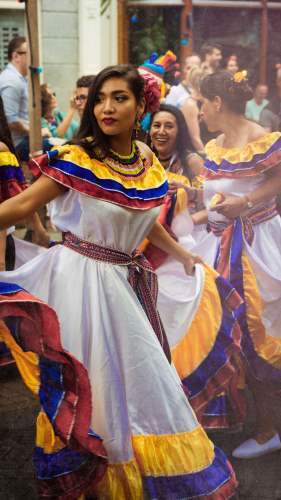 Culture is defined as the collective and diverse customs and traditions of art, architecture, laws, customs, music, literature, lifestyle, philosophy, politics, and religion found in human societies. Over the years, culture of various countries have undergone significant changes and it is safe to say that presently, globalism has ensured that we are now more exposed to various cultures of the world than earlier in the history of this world. Media and immigration have fuelled this process and now we see how the culture of one country is influenced by many others. The most famous example of this is the United States of America which is a potpourri of various cultures.
Look at how we eat Chinese food like noodles or consume American food from outlets like KFC and McDonalds. On the other hand, Thiru Kumar's Dosa is so popular in New York City that is referred to as Dosa man over there. Chicken Tikka is a favourite in many restaurants in the West and is considered Britain's national dish. Closer to home, paneer pizza is a perfect example of a blend of Desi and foreign cuisine. Asian cuisine is the fastest growing cuisine in the United States.
Fashion is another area where we see this phenomenon. We use western cosmetic brands, we wear jeans, crop tops, suits and tie, but also we see women wearing kurta with shorts and men wear Indian attire with a western tinge. The saree is as Desi as an Indian attire can get but did you know that many popular figures in the west have also worn it and absolutely rocked in it? Anna Kournikova, Selena Gomez, Halle Berry, Paris Hilton, Oprah Winfrey, Katherine Heigl and Shakira are just a few names who have donned a saree.
In music we see how jazz, rock and metal have made their mark in India and musicians of these genres have huge fan following among Indian audience. Bands like Coldplay, Children of Bodom, Iron Maiden and Metallica have performed in India to packed venues. Indian music has also had influence on the West. The Beatles’ George Harrison was influenced by Pandit Ravi Shankar and his love for India and its musical heritage could be seen in the song Norwegian Wood which had Raag Bageshri as the base. Bollywood music is very popular in many parts of the world as shown by the number of views the YouTube channel of T-Series gets from outside India. Saxophonist John Coltrane, and guitarist John McLaughlin are also said to be heavily influenced by Indian Classical music.
Even eastern religions have begun to find followers in the West. Steve Jobs, the founder of Apple was a Buddhist. ISCKON centres worldwide boast of millions of Krishna devotees and Miley Cyrus and Julia Roberts are known to practice Hinduism. Yoga is being adopted everywhere in the world for its mental and physical benefits.
They say children of Indians born in the US are called American Born Confused Desis or ABCDs for short. However, with modern technology they're more connected to their homeland and its culture than ever. They might blast the latest song from the newest boy band in their rooms but they will celebrate Diwali in traditional Indian attire, lighting diyas and making rangolis. We can say then that the East and the West have finally met each other and the world is enjoying from the amalgamation of different cultures.

Formula 1: The Pinnacle of Motorsports Racing

The Amazing Culture of Goa

EXCERPTS FROM :THE TRAVELS OF DEAN MAHOMET